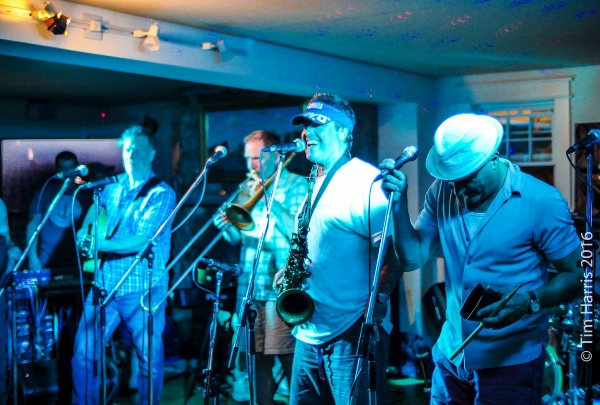 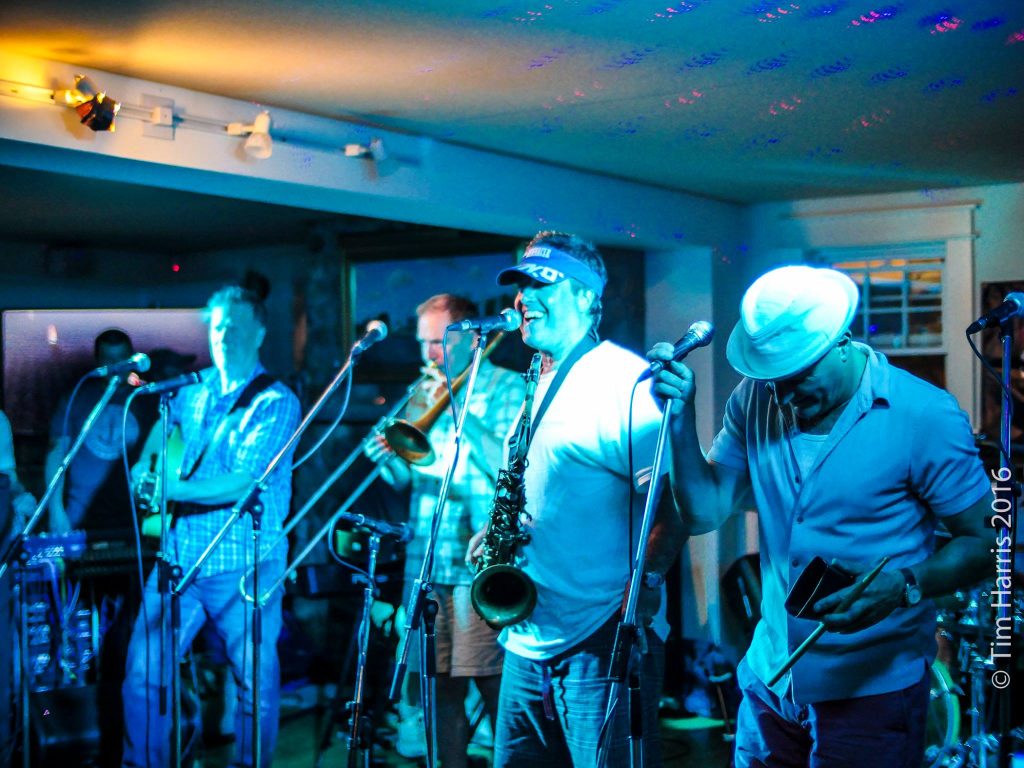 The Hopping Penguins have been keeping audiences on their feet for 40 years. The band has been playing at Helly Hansen Chester Race Week for about 30 years.

The Hopping Penguins may be the band of Chester Race Week, but their origins started in a bit of a rivalry.

It was 1982 and Gary Edwards and Andru Lordly played on the deck of an old farmhouse overlooking the town of Mahone Bay. The house belonged to Dougie Mosher, a sailor who was racing in Chester Race Week. Edwards was one his crewmates. Mosher wanted to have a band to play at his house during race week. Edwards, who is a drummer, had recently connected with Lordly, who told him the pair would have a band one day. Edwards wasn’t thinking about music at the time, but they created a band and practiced for five days at Edwards’ parents’ house.

Getting to the gig wasn’t so easy, though. Edwards recalls driving to Mahone Bay in his brother in law’s van they had loaded with gear. The van broke down halfway there, but they managed to get a tow. When they set up on the deck to play, it started to rain.

“But skies cleared, and the stars came out,” Edwards said. “Everything lined up magically.”

Edwards remembers that show well. They band played covers of the Rolling Stones. He said Lordly started dancing on the stage, flailing around on the deck, almost floating horizontally, knocking over the saxophone and the drum kit in the process. Still, they kept on playing.

“A little tingle went up my spine and the hairs stood up on my neck and I thought, ‘We’re onto something,’” Edwards said.

Edwards calls it the “penguin magic” and he says the band still has it after all this time.

“I describe it as having an old sports car in the garage, and you drag it out and it’s misfiring a bit and needs a tune-up, but it still looks great and it feels fantastic going down the road with the wind in what little hair you have left,” he says. “That’s kind of how I see the band now. This magical, vintage thing that we have packed away and we get to drive it every so often.”

It would be about a decade after that first gig before The Hopping Penguins played Chester Race Week, but they’ve been playing the event ever since. Edwards says he can look at all the portraits of the past Commodores on the walls at Chester Yacht Club and he can get back very far on how many of those Commodores he remembers meeting.

Edwards, who is also the band’s manager, has quite a memory for the Penguins’ history. He remembers the early days practicing in the basement of a house Peter Baylis bought in Toronto. The band called it the Penguin House. Between 1986 and 2003, The Hopping Penguins toured across the country 30 times. They recorded an album in 1992 and two singles, Marlene and Oh What a Shame, found an audience on radio and Much Music (you can find both tunes on YouTube). 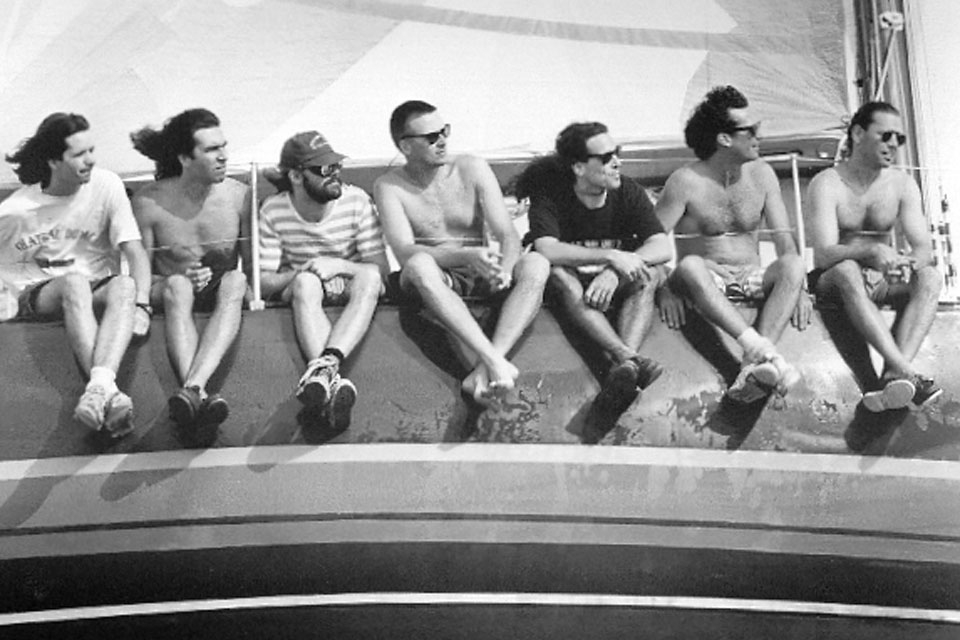 Besides being bandmates, many of the members of The Hopping Penguins are also accomplished sailors. Some have competed in Chester Race Week.

Edwards remembers the band playing 225 shows a year at one point. That number has declined quite a bit over the years as the band members took on other careers. Edwards himself practiced law and he now runs a hockey school. Three of the other band members have PhDs. Last year, the band played just three gigs. One by one, the band members would return to Nova Scotia. Edwards is moving back soon, too. But together they still have that penguin magic.

“I really enjoy being part of that experience of us all sharing this journey together,” Edwards says. They’re family to me. They’re closer to me than my brothers ever were.

“The fact that we’ve been doing this for 40 years means something. We got pretty good at it. For me, there’s joy and achievement in that.”

Over the years, the band has had many members. Edwards and Lordly remain steadfast members of its lineup. Other members have spent decades playing with the band, too. Besides Edwards and Lordly, this year’s lineup includes Peter King, Peter Baylis, Brad Conrad, Ross Billard, Basil Chaisson, and Danny Martin.

The band has done so many shows at race week, Edwards can describe exactly how the set will unfold.

Joe Hill a former Commodore at Chester Yacht Club, sits just off the stage and watches the first set. Edwards calls him a “beautiful soul.” David Creighton, another fan and current Commodore, shows up for the first couple of sets, and dances along to the tunes. Meanwhile, Tim Harris, former Commodore, captures some photos of the band.

Edwards says all of that happens in the first set. Then the stage gets crowded by the younger audience. And they’re ready to party.

“The thing about Chester that’s always been weird for us is that we know so many people there,” Edwards said. “And now it’s their children and their children’s children.”

Over the years, the band’s sound and repertoire has expanded. They started out as a ska band, playing a lot of what’s known as two-tone ska, a style of music that was popular in Britain in the late 1970s, early 80s that mixed traditional Jamaican ska with elements of punk rock and new wave. Edwards says a lot of the two-tone bands wore black-and-white attire, so that’s where the penguin inspiration came in. Then the band added reggae, funk, and soul because the band’s singers wanted to sing those songs. They also played a lot of James Brown’s songs. But the goal was always a good time.

“We’re a party band. We sell beer. We play party and dance music,” Edwards says, “but with a focus on Jamaican music.”

All the band members are experienced sailors and have raced locally and internationally, including at Chester Race Week. Chester knows The Hopping Penguins well. Edwards, who has a house on Tancook Island, says he often runs into fans in cafes and restaurants in Chester or on the ferry from the island to the village. It seems many people connected to Chester and race week claim to be The Hopping Penguins’ number one fan.

“Our connection to Chester and race week is so multi-layered, I can’t begin to explain it,” Edwards said.

As for this year, Edwards says the audience can expect the same magic.

“I want to do a slightly more refined version of what we always did because we have guys with knee replacements and guys who are 40 pounds heavier than they were before, all those things that happen when you age,” Edwards says. “But I still want that frenetic energy. I don’t want to ever lose that, and I want to be able to deliver that and give it a kind of ageless wonder.”

For now, Edwards says he and the band are looking forward to another show at Chester Race Week. Maybe they’ll get in some sailing, too.

“Can we hang in there for 50? That would be really something,” he says. “That people are still embracing us as we age is a beautiful thing.” For a moment when you’re up there it becomes timeless, and you forget all the problems. It’s a magical thing.”