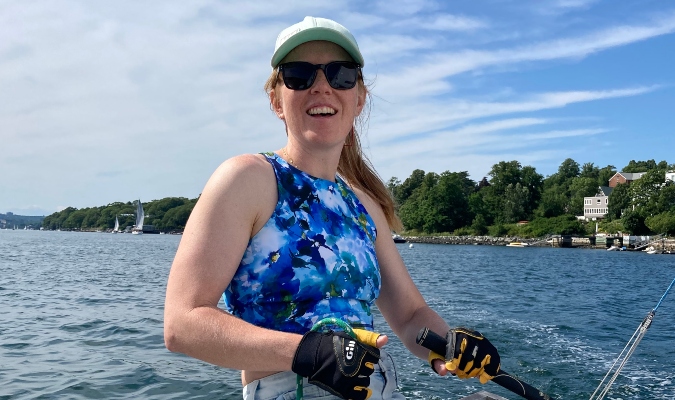 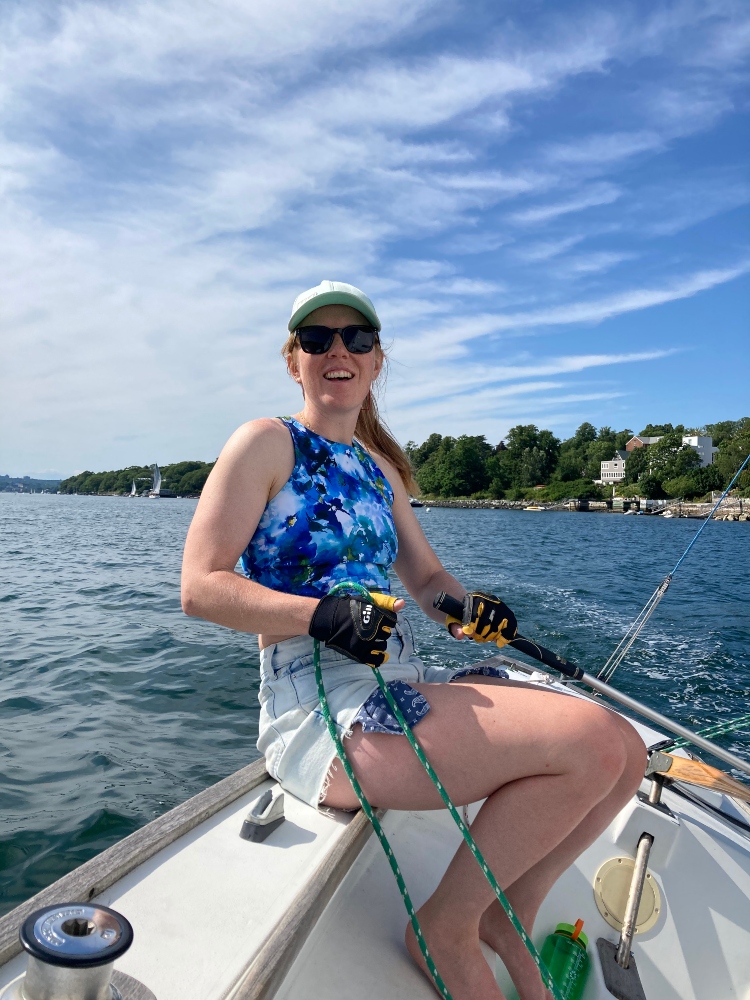 Anna Millar doesn’t remember the first time she went sailing, but she said she’s been sailing “since forever.” She was just a mere six weeks old when her father took her on a boat.

“We sailed a lot and spent a lot of time on the water. As I grew up, I was very connected to sailing,” Millar said. “My dad was a big racer, so I probably did my first race Wednesday night race when I was about eight or nine.”

Millar first learned to sail at the age of eight when she was growing up in Vancouver. She got into racing at the age of 12. She moved to Halifax to attend university when she was about 20 and she’s lived in Nova Scotia for about the past 15 years.

Millar said she’s raced in a lot of the fleets at Chester Race Week, and she’s really happy to be in the Bluenose fleet this year.

“I spent a lot of time the last two years sailing Bluenoses, so to be in that big fleet will be really exciting and I am a little nervous for that,” Millar said. “I am doing my best to represent and hoping encouraging other women to get involved into racing at a more competitive level.”

She said her first Wednesday night race in Nova Scotia was racing in a Bluenose, a wooden one-design designed in 1946 by naval architect William J. Roué for a group of sailors from the Armdale Yacht Club. She credits Eric Siegel, the fleet captain officer at the Armdale Yacht Club in Halifax for her getting into racing Bluenoses.

“He’s been wonderful in encouraging people to race one-design (boats) at Armdale Yacht Club,” Millar said of Siegel, who has two Bluenoses and offered her one to sail on Thursday nights. Siegel and other folks at Armdale Yacht Club encouraged Millar to sign up to be a skipper at Chester Race Week.

Millar is very supportive of women in sailing. Her personal rule for Thursday night racing at Armdale is “no boys allowed.”

“There aren’t a lot of female skippers and generally not a lot of women, especially on the classic fleets,” Millar said. “I just try to make that my rule.”

She’s making an exception for Chester Race Week, though. Her crew includes Graham Hart, who she sails with every Wednesday, and Bridget Taylor, who races with her on Thursday nights.

Millar, Taylor, and Hart haven’t raced together yet, although Millar is confident about their team skills. Millar and Taylor just met this year when Taylor joined the Armdale Yacht Club.

“It’s been fun getting to know her and spending time on the water together,” Millar said.

As for Hart, she said they can “check each other” when needed.

“As a female on a boat, you can get dismissed easily and I would say Graham is the opposite of that,” Millar said. “He’s super supportive and really encouraging and helps me not get too anxious when I get in my own head.”

Millar said it’s tough to pinpoint what she likes about racing at Chester Race Week.

“It’s just such a magical place,” she said. “It’s really amazing to be surrounded by a whole bunch of people who love the same sport. We’re all down there for more or less the same reason. It’s so nice to be able to spend four straight days just thinking about sailing and not worrying about anything else. And Mahone Bay is just so beautiful.”

And Millar has advice for women who might be thinking about sailing but aren’t sure what to do next.

“One really challenging thing is that if you have one not-so-great experience on a boat, that’s not a representation of sailing,” Millar said. “Keep reaching out, try sailing on different boats. Talk to people about it and just get down to a yacht club. Often there are people who need extra crew. You don’t have to know a ton about sailing to get on a boat.”

And for women who do sail, Millar encourages them to bring other women aboard.

“Female sailing in Nova Scotia is growing a lot and there’s a lot of potential,” Millar said. “It’s really exciting to be on a boat with all women and for long time that wasn’t a possibility.”